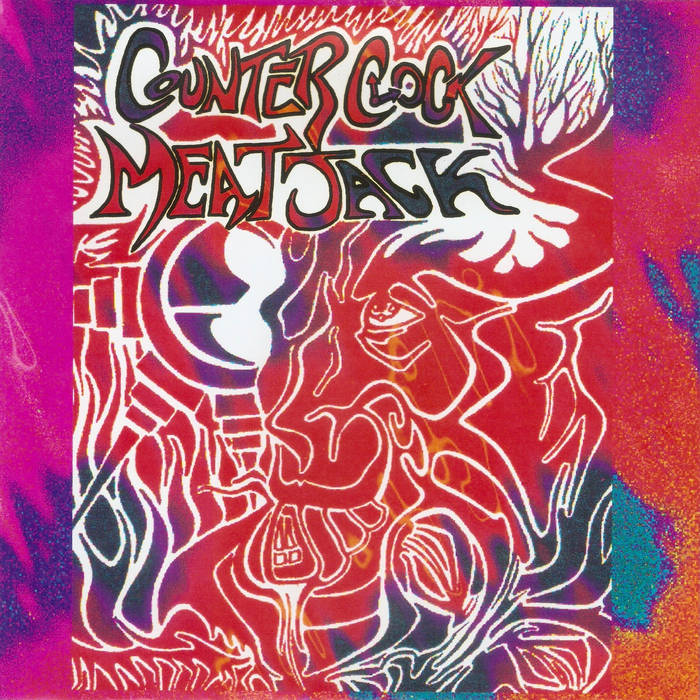 In this second installment in the unofficially monikered “So, you think you know ‘JACK?” series, we hear MEATJACK starting to refine the sound they would eventually distill into their debut album, 1999’s “Trust”. 1994 was an incredibly busy year for the band; they spent four months touring the United States between March and mid-November, and in short breaks between tours, they recorded the tracks for this release and moved their rehearsal space/recording studio/headquarters from the Daniloski brothers’ parents’ basement in Sykesville, Maryland, to a former funeral home in Baltimore (this creepy, decrepit band house would come to be known as the Meatshack).

In spring 1994, MEATJACK had launched their first tour, an epic 10-week journey across the U.S., promoting their debut single "Lloyd Geaditz"/"Hogfat" on Merkin Records. On that tour, they shared a bill in Spokane, Washington with the band Counterclock from Oakland, California.

At the end of an eventful day on the road (among other things, during the overnight haul to the show, the band had to stop and fix their van’s muffler by the side of the highway during a blizzard in the wee hours of the morning in Washington state’s Cascade Mountains. . . there was some drama from the venue/promoter as to whether the band was supposed to be on the bill or not—after some stressful discussions, the venue eventually allowed the band to play, but they wouldn’t allow their underage bass player into the venue except to load in, play, and load out. . . and Kurt Cobain had just been found dead. . . ya know, typical day on tour!), the two bands from 3000 miles apart discovered that they already knew each other.

Counterclock was comprised of 3/4 of the lineup of Virginia’s genre-hopping math/metal/punk/jazz band False Sacrament. The members had recently relocated to California’s Bay Area. MEATJACK were familiar with False Sacrament, as they had shared a bill or two on the east side of the continent.

The bands liked each others’ complimentary heavy styles, as they shared prog leanings, relishing playing odd chords and odd time signatures, and just being odd. Jason from MEATJACK suggested the bands team up for a split release, and Counterclock suggested their current label Too Many Records (formerly Very Small Records) to release it. At the time, “splits”, as they were called, were becoming very popular in the DIY indie music scene. MEATJACK continued to explore this format over the next few years with fellow touring bands (including Bongzilla and Superhighway Carfire).

The band recorded these tracks in mid-1994 on a Tascam TSR-8 half-inch tape 8-track recorder, in their rehearsal space in Sykesville, during a small break in that year’s grueling touring schedule. The release was a small-hole 33 1/3 rpm 7-inch vinyl EP, which had a longer running time than a typical 45 rpm single. Each band provided two tracks. A delay in Counterclock’s artwork resulted in initial copies being issued by the label with a temporary cover (physical orders will receive both versions of the album art).

“Head” has MEATJACK rocking out in their frequently favored waltz time, over a bed of heavily treated guitars. We hear the band approaching their more aggressive, angrier, signature MEATJACK sound. “Sac Face” sees the band dipping into a slightly lighter, topsy-turvy nonsense world of broken fun house mirror shards and side-show freaks. . . or is it just the real world?

Recorded in June 1994 at Meatjack rehearsal space - Sykesville, Maryland
Originally released in 1995 on 7-inch vinyl EP by Too Many Records (#TM 65)