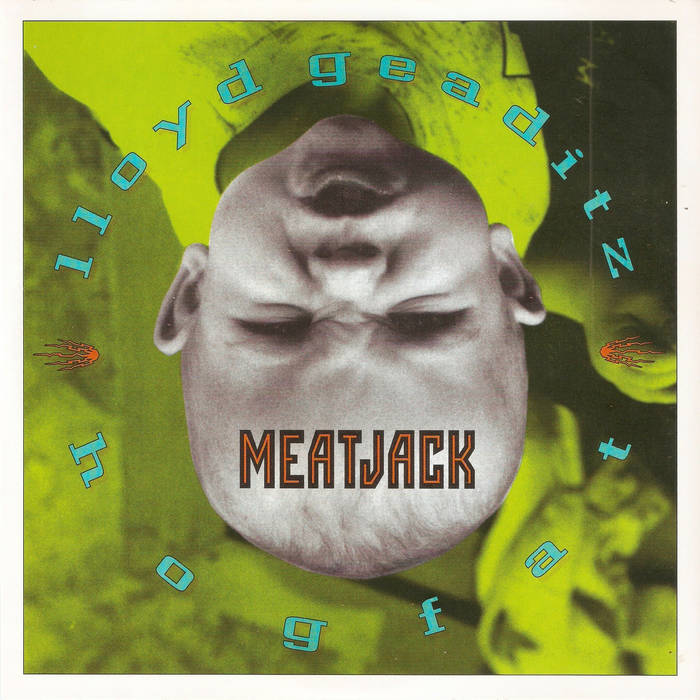 This is the first installment in the unofficially titled “So, you think you know ‘JACK?” series. Years before MEATJACK unleashed their crushing debut album “Trust”, the band was busy honing their sound by writing songs and putting them out on various 7-inch vinyl releases and compilation CDs, going through growing pains in the form of frequent lineup changes while relentlessly touring, and even dealing with the threat of a lawsuit.

As MEATJACK’s first official release, these two songs appeared on a 7-inch vinyl record in the spring of 1994 on Baltimore, Maryland’s indie rock label Merkin Records. Before this, there were a few CDs and cassettes being circulated by the band with altered artwork, bearing the band name MEATJACK, with the album title “Gnaw”. However, to those in the know, these purposely mangled albums were originally a 1992 release by Maryland band Stranger Than Fiction (also released on Merkin Records, and featuring 3/4 of what was to become MEATJACK’s first lineup).

Stranger Than Fiction was formed by brothers Brian and Jason Daniloski in Sykesville, Maryland, in 1988. The band had already released three full length albums by 1993, when they were served with a cease-and-desist letter from a law firm representing a group out of Texas bearing the same name. In the late 80's, when the band was named, the internet wasn't yet available as a public tool to very easily look up if another band was already using a name (the best one could do was to look up band names in a huge book that certain record stores would have at their counter). It didn’t look good for Maryland’s STF, as Texas’ STF were able to prove that they had been using the name in commerce for at least a year before the Daniloski’s had even formed their band. A band name change after almost five years in service was unwelcome, but inevitable.

To add insult to injury, this news came shortly after Maryland’s STF had just released their first full length CD, “Gnaw” (two earlier releases were issued on cassette only). As the band had just sunk all of their funds into producing “Gnaw”, manufacturing new CDs and cassettes was not a possibility. Rather than destroy all pressed copies, the band decided on the much cheaper alternative of printing some small paper stickers with the name “MEATJACK” designed to fit over the areas where the name “Stranger Than Fiction” appeared on the original album art, and to black out any other areas that were too small to bother with. A laborious assembly line task for a dedicated band, indeed!

To further add to the changes happening at the time, the band was also undergoing a shift in personnel, sound, and look. Hank Roschen, who had been collaborating with the Daniloski brothers in STF since 1990, left the band. He played bass and sang on two of STF’s three releases. As a visual artist, Hank was a integral factor in how the band’s aesthetic developed. By the time of his departure, he was creating all of the band’s artwork (albums, merchandise, and props and projected visuals for the live shows), and had become a major songwriting contributor. His distinctive lead vocals were featured on half of the tracks on “Gnaw”.

The band, who had started working with Merkin Records in 1992, was to continue this relationship with a new name, a new member, and a newly developing sound. Ben Kraft joined on bass, Jason started singing lead vocals on some songs, and the band began to slowly forge a more focused, heavier, aggressive sound over the next few years.

The band recorded these tracks in 1993 on a newly purchased (with band funds!) Tascam TSR-8 half-inch tape 8-track recorder in their rehearsal space, which at the time was still in the Daniloski parents’ basement, in Sykesville, Maryland. It came out while MEATJACK was on their first tour, a whopping 10-week voyage in a Dodge van, in the spring of 1994, that spanned the entire United States. Wanting to give their fans something unique, the band hand assembled each record into a poly bag, which included a sticker and a handful of plastic glow-in-the-dark insects that they had bought from a novelty supply wholesaler.

“Lloyd Geaditz” finds MEATJACK in a more humorous mode than usual, with Jason Daniloski adopting a taunting, sing-song delivery (inspired by Ween’s “Push th' Little Daisies” of all things!), while “Hogfat” puts the listener into slightly darker, psychedelic terrain, with Brian Daniloski on vocals. Years away from their signature sound on these early recordings, we still hear MEATJACK employing several of their trademarks (dissonant chords, psychedelic effects, and a proclivity to play in waltz time).