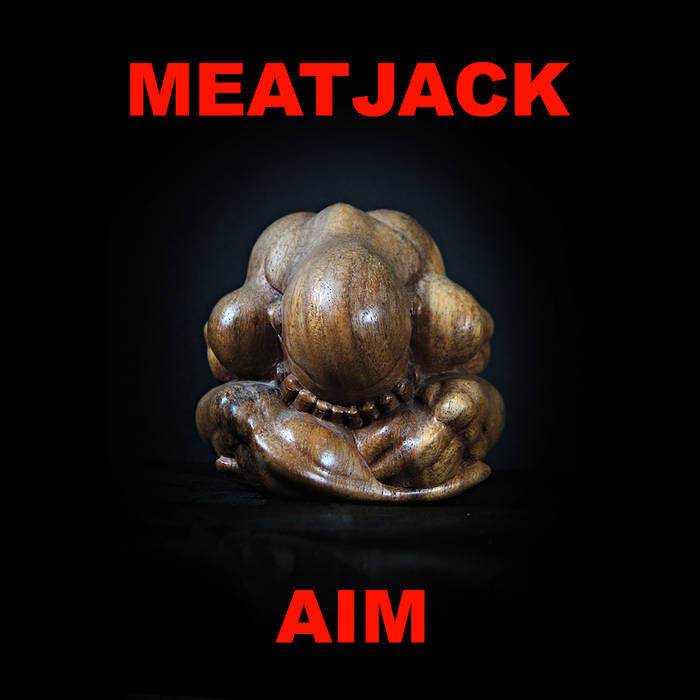 AIM is the MEATJACK debut album that never was. Engineered by Steve Austin (renowned producer, engineer, and founder of the band Today Is The Day) in early 1996, it was originally intended to be MEATJACK's debut full length CD on an actual label. The band's label at the time rejected the recordings, stating that they didn't understand the musical direction the band were taking, and that they weren't sure who the audience would be for this kind of music. As a result, AIM was self-released on cassette in a very limited edition as a temporary measure while the band searched for another label (at that time it was still quite expensive for a band to self-release their own CDs, and CD burners were still just around the corner from becoming common affordable consumer technology).

Shortly after AIM's release, the band underwent some major changes. By the end of the year, Jason Daniloski had moved from second guitar to bass, turning the band from a quartet into a power trio. Not long after, original drummer Mike Hill quit the band, and MEATJACK welcomed their new skin-basher, Eric Dixon.

By the time things stabilized, and new label interest was secured with At A Loss Recordings, the band felt that their lineup, repertoire, and sound had changed significantly enough that they decided to record a whole new debut album, this time in Baltimore, with Jon Smulyan engineering. Some songs from AIM were reworked and re-recorded for MEATJACK's debut album, Trust, and some were lost in time.

Here, once again, is AIM, expanded, remastered, and with new cover art. This expanded edition contains previously unreleased demos that the band made for AIM in their rehearsal space/studio, which include a few more tracks lost in time.

AIM (tracks 1-11) was originally self-released on cassette in 1996.
Recorded and mixed at Austin Enterprises (Nashville, TN) by Steve Austin in early 1996, except track 11, which was recorded and mixed at The Meatshack (Baltimore, MD) by Brian Daniloski in winter 1995.

While AIM never saw an official label release, some of its tracks did find a home. "Falling Down" was released as one side of a split 7-inch vinyl record with Wisconsin's stoner metal crushers Bongzilla on the other side, from Pinecone Records, and "Hollow" was released on Kwality Records' local Baltimore music compilation CD, "Adventures In Mobtown". Both were released in 1997.